Before diamonds can be reassessed and certified, it is important that these extremely successful ones are cleaned. We call them diamond cutting.

Boiling is one method of cleaning diamonds. Diamonds must be checked at every stage of manufacturing and sorting to determine what defects remain.

At some stages of the manufacturing process, dirt sticks to the diamond’s surface, which can be traces of adhesive, dust from polishing, or other things. At the end of the manufacturing process, before they are sorted as polished, diamonds undergo a boiling process – basically, “cooking” that removes all the foreign substances stuck to the diamond. There are two kinds of boiling – regular and deep boiling, also known as deep cooking.

Regular boiling is intended to remove external dirt only, and is conducted at various stages of the polishing process as the polisher determines necessary to continue the process. Boiling is done is special rooms.

Special test tubes are set up in special ovens, into which diamonds are placed. If the stones are large, they are put in individually; if the stones are small, they are placed in packets. Sulfuric acid is poured into the test tubes along with a potassium chloride mixture. Diamonds are not affected by acid and are therefore not harmed. The diamonds are then “boiled” for about 15 minutes, until the potassium chloride dissolves and the liquid turns yellow.

The diamonds are then removed from the oven, cooled, washed with a great deal of water, and then with spirit and tried well with cloth towels. Every diamond is then returned to its brifka. At the end of the process, the diamonds are sparkling and bright, clean from any remaining external dirst.

The purpose of deep boiling is to try and reach internal dirt, which the boiling materials can reach via a tiny crack known as an “open inclusion” the tiny bit of black graphite (“fix” as it’s known by diamantaires) trapped inside the diamond. These tiny dots are trapped in the diamond when it is formed. Since acid doesn’t corrode the diamond itself, but only the dirt that has entered the stone, the process allows dirt to be removed so the polished diamond looks better.

Deep boiling is a long process that lasts 10-12 hours. It is done using a mixture of extremely strong acids, at high heat. Diamonds are placed in very strong containers made of tantalum and are then sealed in pressure containers. After the boiling process, the containers are cooled, the remaining acid steam is released, and the diamonds undergo another regular cleaning process. The deep boiling process is more complicated and more dangerous than regular boiling 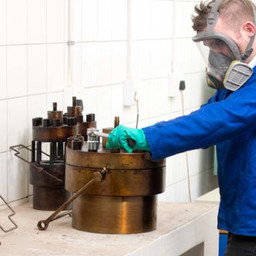